The Continent of Ictaria: a series of thematic maps

This map series is the most recent iteration in my worldbuilding project. I already created a few versions of this world map in the past, but none were as elaborate (and as realistic, hopefully) as this. I completely redid the terrain, and then used that as the backdrop for a series of maps. At the moment there's three — political, linguistic and topographic—but there will definitely be more. Maybe a map showing the different religions and their distribution throughout the known world?

The first map in the series shows the different countries:

This map is made from the standpoint of the "civilised" world, represented by the Papal States (the pink blob in the center). Since they commissioned this map, they got to decide the position of the prime meridian... and chose to have it run straight through the Papal Academy just west of Cailltir. Notable about this political map is that they show "civilised" nations and as proper countries but only mention "uncivilised" tribes in grey italics. This is a very political choice, because otherwise they might have been forced to count all of these disparate tribes as one nation... which would cause the "civilised" nations to look small and insignificant in comparison.

Next up is a map showing the distribution of this world's languages, and here you'll notice that the empty regions, too, are actually brimming with cultures. The nomadic tribes in Hamad (the eastern empty zones) and Svariin (the north) have very diverse, complex societies that are totally neglected in the first map. But not in this one:

Currently the last map in the series is a topographic map, with hints of the different climates. The north is tinged blue (hinting at the arctic conditions), the east and extreme south are coloured tan (showing the distribution of the deserts and dry savannas). The southeast and the fringes of the Silver Sea are dark green (suggesting warm and wet climes) and the west is mostly lighter green (the temperate climates)

These are all the maps that I have created for this world at this point, but more are sure to come. In the meantime, if you want to explore older maps of this world, just check out the links below: 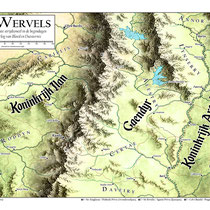 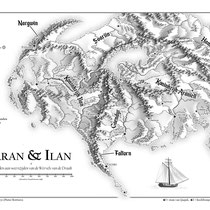 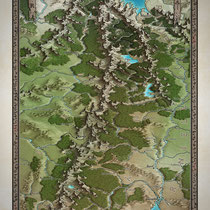 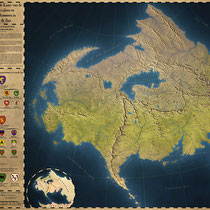 Bonus points if you can find the cities below on the new map above! 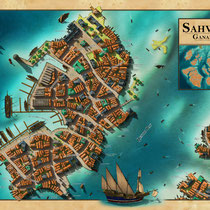 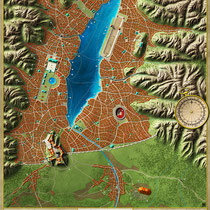 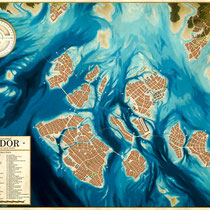 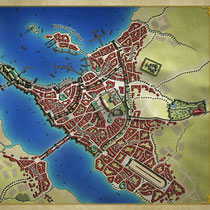 All three are still accurate as well, although they don't immediately appear in the new story that I've started recently started writing (the old one is now defunct). 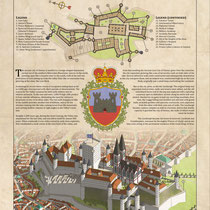 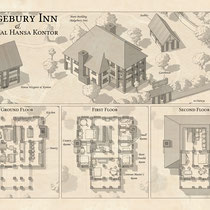 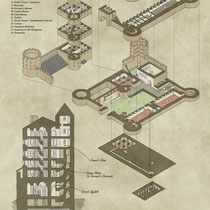 All images © copyright Pieter Rottiers or clients. No use permitted.